Autumn! 9 months and over 850 miles run this year.  Just one more marathon (Dublin, Oct 26th) until my winter hibernation!  Weirdly the final mile at Dublin will coincide with my 1000th of the year, never thought that would happen when I came up with this idea last October! 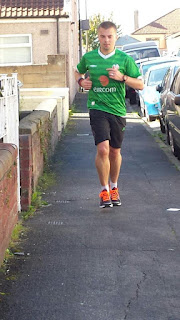 It's been pretty warm out in September and training has gone well aside from the odd twinge.  I've been ice-ing my knees and calves almost every night which has meant that I've recovered well for the next run.  In my head it's been like every run is a football match and the time in between is training for the next performance.  Small compensation for not making it as a football player, my friends will point towards an 11 minute sunday league debut (and final appearance) where I was a substituted substitute.    Things are going well for Dublin so far.  I've intro'd myself to the Irish ME Trust who have been super-friendly helping to promote my visit there.  I've mailed off approaches to radio/paper contacts, hoping to get something back as the race approaches.  I was invited to an ME support group meeting but unfortunately we don't arrive until the Sunday afternoon.  It looks like I'm going to have a few people coming to cheer me on which will be fantastic, I'm also going to be joined in the race by my good mate Ben Scott who is completing the last of a very impressive 4 event challenge this year for Cancer Research UK.

If anyone is keen to meet, here's my itinerary for Dublin;

Sunday 25th October - Land at 2pm, need to check-in and find expo to get race number.  Will be free from 5pm

Tuesday 27th October - Flying back early morning, unlikely to be able to meet.

I got some new running shoes this month, you will see me coming! 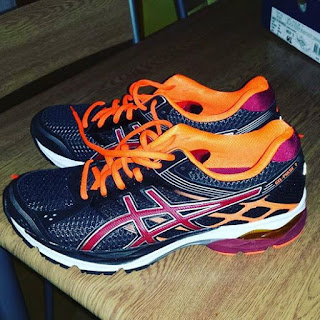 Asics Gel Pulse 7, with a nice discount from Easyrunner in Bristol

They should get me through Dublin and the training for my 5th race in April 2016.

So I've been keen to book this one for a while but had to hold fire until Easyet released their next tranche of flights.  There's only a handful of marathons in Greece and I was keen to have Cat with me (she works in a school so fitting around school holidays is tricky) so we chose this one in Greece's 2nd largest city.  The race begins in Pella, the birthplace of Alexander The Great and travels upon 'the road of gods' towards the White Tower at Thessaloniki.  The course itself is said to be pretty quiet until the last 3-4 miles on a very straight undulating road taking in some pleasant countryside, it could get a bit dull out there but Thessaloniki looks like a really nice city.

Only 50 Euros to enter and you get a race shirt which is pretty good value.  Flights were quite cheap and I managed to find a very cheap deal for the Bristol Hotel (4*) near to the race start.  Training will start in January for that one and I get the luxury of a 3 month build up to get back up to fitness after a couple of months of working down after Dublin.  Only 8 weeks after that one until Stockholm though which puts more emphasis on a good long winter training programme.  I've got 2 more marathons to book for 2016 at the moment (will be 4 in total), will let you know more about the other 2 soon!

I had a good run with my buddy Josh around Long Ashton (11m) along with some solid weekend runs to Nailsea (15m) and Sheepway/Portishead (17m).  I don't know if I've necessarily improved over the last few months (my times are very similar to back in March) but I do now have the experience to know that if I'm struggling I can hang in there and things will get better in a few minutes.  I've definitely made better use of my midweek 6 mile runs, using one for hill training and one for speed/intervals, which have been rather brutal but essential after my experience in Helsinki.

Within the next two weeks they will officially form the European ME Research Group with its inaugural meeting in London. Invest In ME have managed to bring together top researchers from seven European countries together to discuss research strategies for ME, EU funding opportunities and a collaborative approach to research.  These have resulted after their hugely successful colloquiums and conferences.  It's fair to say that the work this volunteer run charity are doing is truly amazing.  Their researchers have recently been over in Bergen, Norway to meet and consult with the scientists currently working on the already incredible Rituximab trial over there which yielded the exciting results I talked about before.

Whilst they've got 7 countries involved so far, I'm hoping that by running all over Europe we can attract the attention of others and highlight the need for some countries to maybe even form their own association as I pick up followers.  You can follow their progress through the links below:

Please also follow 'Let's Do It For ME' who are run by ME patients to help raise funds and awareness for the projects that Invest In ME are pursuing.

One of the biggest challenges they have is that when the media want a comment about ME and research they are directed to other larger ME charities who are doing very little in the research field.  I've learnt the truth about how these charities operate and spend donations as well as the links they have with the government and it's critical that we help raise the profile of Invest In ME -they're the ones with the researcher contacts, focus and urgency to find cures and treatments.

That's it for now, thanks again for your support, look forward to seeing some of you in Dublin in 3 weeks!

Total Sponsorship Raised:  £2110
Facebook Followers:  182
Twitter Followers:  450
Miles covered: 102
Average temp:  17C
Lessons learned:  Ice every night, having tied icepacks to my legs all month have now got some proper ice wraps for my shins and knees and it's sure to work wonders.