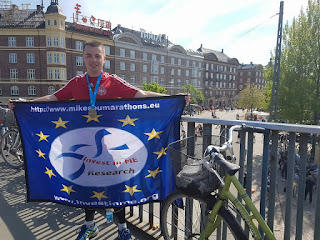 Summertime!  I've had a busy 3 months, conquering another country (#17 Denmark) and another Half Marathon (Yeovil, Somerset) so here's a quick review....

Ahead of the trip to Denmark I interviewed Rebecca Hansen from the Danish ME Association and also patient Kamilla Thomsen who told me more about M.E. there.

Interviews in English and Danish here (thanks to Helle Rasmussen for organising translations). 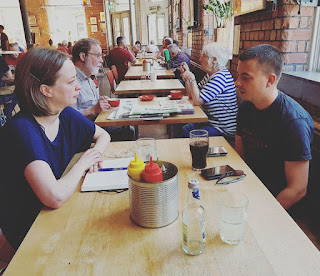 Lorna Stephenson interviewing me in my local pub

In May I met Lorna from the Bristol Cable paper who was keen to feature my challenge and help further raise awareness for ME.  Lorna has written about M.E before and the PACE trial farce and it's great to have such strong local support.  The full piece she wrote isn't online yet but you can read it below... 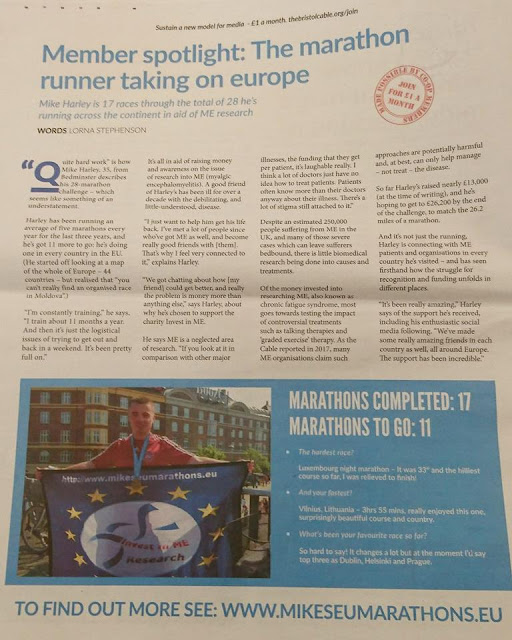 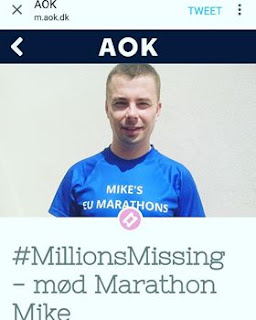 Thanks to Helle for securing some great press coverage on the AOK website ahead of the Copenhagen race.

I was keen to support the Danish ME Association and the Copenhagen demo on May 12th to raise awareness for people with M.E.

I recorded a message of support to the people of Denmark urging them to do whatever they can to help push for biomedical research and a change in perception.

We flew out on May 12th to Copenhagen and were really pleased to be able to be a part of the protest by the Black Diamond. 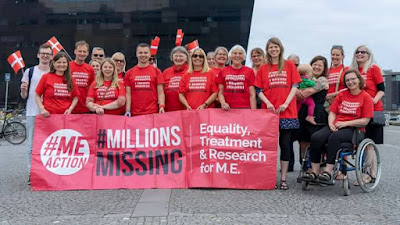 Honoured to be part of the demo and meet so many nice people.

I had some really nice messages of support for the race and it was great to take a boat trip and visit the Little Mermaid. 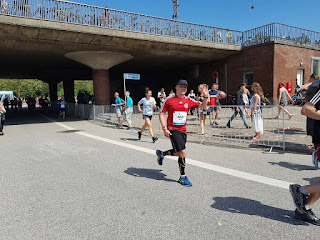 Last few moments of a tough but beautiful race

Copenhagen Marathon was warm with a light breeze, I enjoyed the course, in particular running with fellow EU marathon collector Tim Teege.  I struggled a bit after the halfway point, mainly as it had only been 3 weeks since the race in Vienna but I was delighted to finish in just under 4 hrs 30.  Full race report here. I was really bowled over to have the Euromast in Rotterdam lit up on ME Awareness Day (May 12th) in my honour and in dedication to the amazing work that Invest In ME are doing.  Thanks to Celine and the Dutch Millions Missing team for this!

Really kind of Vienna Marathon to put up a post about my challenge a few weeks after the race, they were also kind enough to post a number of messages on Facebook which had over 100 shares.  Top stuff, much appreciated. 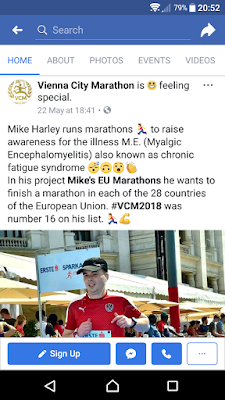 Had a long weekend break in San Sebastian in early June to re-charge the batteries.  Fantastic to eat pinxtos and wander around Bilbao and San Sebastian for a few days without a race to run. Enjoyed a really great run on the amazing beach there and around the old town, always like to get a run done when I go abroad as you know!


Invest in ME Conference

On May 31st I was very lucky to be asked to attend the 13th Invest In ME Conference in London for the second time.  It was great to hear from so many amazing scientists and researchers as well as meeting up with friends that I've made across Europe. 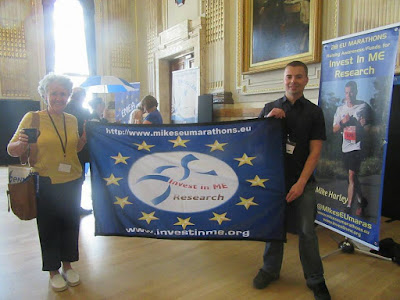 Helen Oliver, a fantastic fundraiser herself

Although the process is painstakingly slow when it comes to good science, the week of presentations and colloquiums continue to give hope that a biomarker and successful treatment can be found.  All I can do is keep going, raise a bit of money and awareness on my way around this challenge.

On June 10th I ran the RNAS Yeovilton (Heron Half) raising over £200 for Invest In ME and posting my second fastest time on what was a mostly flat and cool race (nice change!) 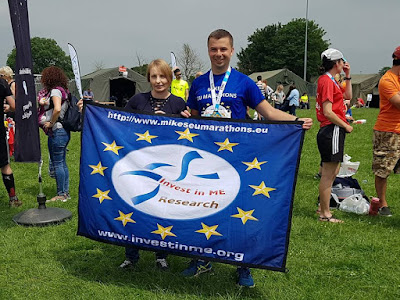 Mid June saw me hit the halfway point in my target to raise £26.2K for Invest In ME research projects.  A huge boost, only 11 races left but I'm optimistic I can get close by the time the challenge ends in October 2020. 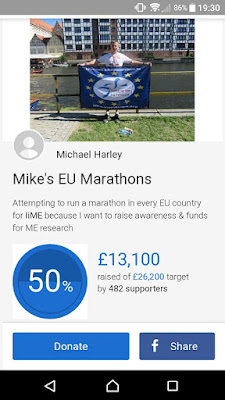 On the 21st of June, ME was finally given a decent amount of time for discussion at Parliament.  A cross-party group of MP's came together in agreement that more biomedical research needs to take place to help patients in the UK. 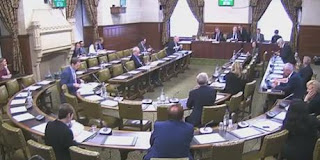 Hopefully there will be follow up sessions in the chamber but this felt like a good start with some passionate speeches on behalf of constituents and their families who continue to be neglected and struggle.

As of early July, despite the heat I've been posting some really improvements in my short and long run times.  For a good couple of weeks I was scratching my head as to why but having looked through the monthly mileage I discovered that it was merely down to running more miles per month.  Not exactly rocket science but running more means that you get better at running, who would have thought it. 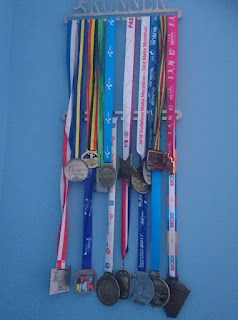 Still a bit of room there

June was tricky to fit in the runs with the World Cup on and so many evening trips to the pub to watch England progress further than expected.  But July has been really positive as I've been injury free and although having to stop a little more to get water/not hallucinate in the heat, it feels like I'm doing some of my best running.  New PB's for 5K, 6m, 7m, 16m, 18m have given me renewed confidence that despite being 35 that I can keep improving as the challenge continues.

Hopefully keeping an eye on diet, more hot weather running and a big August will mean that I turn up in Estonia in good shape to have a go at my 3.55 PB from Lithuania last September.  That and another £2-3K by the end of the year on top of the total will make it a pretty satisfactory year.  It's been an eventful and profitable year for raising awareness with terrific support from Malta, Austria and Denmark.  I know I won't be expecting anything from Estonia and Bulgaria but I'd like to post some times to be proud of to round off the year.

Next up for me race-wise over the next 3 months will be the Sturminster Half (Aug 5th) in Dorset followed by Tallinn Marathon, Estonia (Sept 9th) which will be number 18 of 28.  The race will take place on Estonia's 100th birthday so it's sure to be an amazing atmosphere!  Then it's on to Sofia for the last race of the year on October 14th. 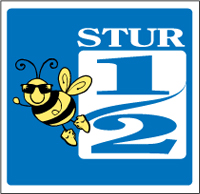 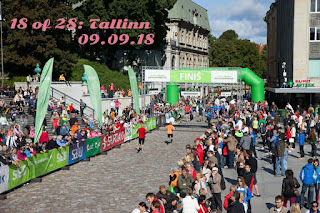 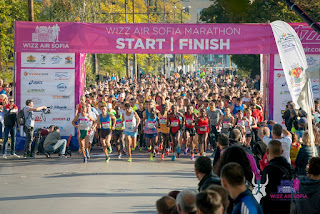 From North Dorset to Estonia to Bulgaria!

Very keen to hear from any M.E patients who would like to tell me their story from either Estonia or Bulgaria -please do get in touch.

If you'd like to sponsor me you can do so below!