Wow, what a 3 months it's been in my little world.  After finishing 2018's 5 marathons (Malta, Vienna, Copenhagen, Tallinn and Sofia), we were delighted to welcome a new member to the team, baby Lucy Rose Harley! 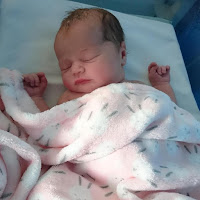 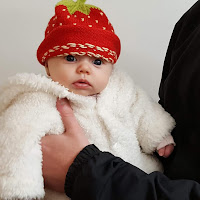 Cat did an incredible job in just 3 hours of labour.  We had a few days in hospital before bringing her home.  We've now got her passport ready and she'll be coming to 4 of the 6 international races this year!

After much research, debate and frantic calculations I've picked and entered 3 more races for 2019. 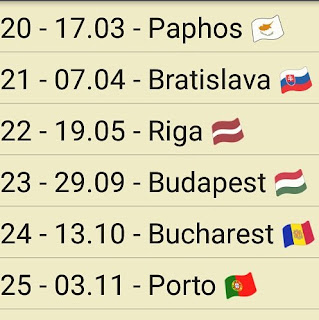 I'll be travelling to Hungary for the first time to run in Budapest with Cat and Lucy, followed by Romania with fellow M.E marathon addict Ben Scott.  Cat and Lucy will then come out with me to Portugal for Porto Marathon in early November!

The Beginning Of The End

This leaves me with (unbelievably) just 4 to go; Germany, Italy and Croatia followed by a repeat of UK.  I'm repeating London as it feels the only proper way to round off the challenge and gain maximum press exposure for Invest In ME and their biomedical research projects. 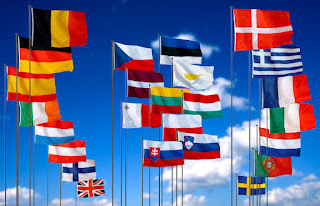 Well aware that we could be out of the EU by then but still hoping that there will be interest and that I can blag my way into the race, avoiding the dreaded ballot system.  Ending out in Croatia just doesn't feel right and whether I decide to hang up my trainers for good or move on to more running challenges, it does feel exciting to run on home soil to finish it all off.

As I've mentioned before, when I was 18 I ran the London Marathon.  This would be my first ever marathon and also my last until the age of 31.  I remember running before college every other morning in the dark past the graveyard between Rumford and Penrose in North Cornwall and the long runs to Porthcothan and beyond.  All with a cassette walkman in my pocket and bottles of water stashed in hedges.

Back then I ran for the Air Ambulance and appealed for some help with costs (trainers, coach fair to London etc) with no luck.  Not much has changed there!  I found a cutting from the local paper amongst some old school reports.... 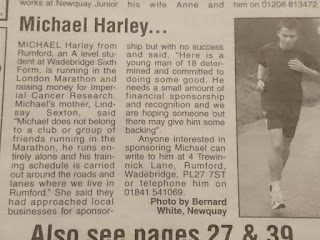 January 2019 marked 4 years since I started this challenge and could once again run further than the end of my street.  I've now run over 4000 miles for Invest In ME raising £15000 in the process and remain as determined as ever to make some sort of difference to the perception and treatment of ME.  To say it's been an incredible experience so far is a massive understatement, so many great memories, friends made, pain barriers hit etc.  When I came up with this crazy idea I really wasn't sure I'd get this far. 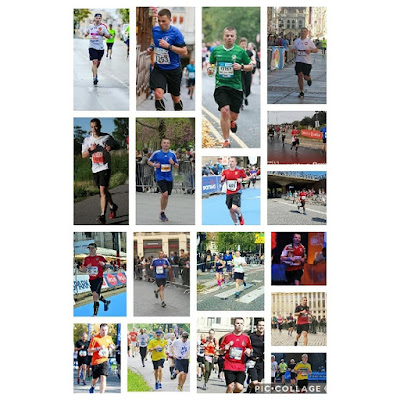 I'm not sure that I'm improving significantly with each race.  A lot depends on temperature, training and diet but I am pleased to say that after 126 miles of training in January (compared to an injury hit 67 last January) I appear to be in pretty good shape.  I've got 9 races left (counting London) and £11K to raise to hit target, I'll also aim to beat that elusive 3 hrs 55 mins of Vilnius, Lithuania in Sept 2017.

After the Gloucestershite ME/CFS Friendship Group heard about my upcoming Half Marathon race in Quedgeley I got talking to Rachel Ephgrave about her experiences with M.E.  She kindly agreed to tell me her story and I added a section about my challenge which was published by Gloucestershire Live website. 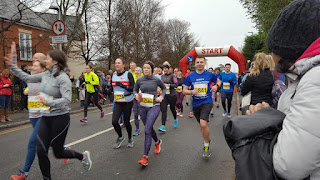 No winter gear for me!

Link to the article:  Gloucestershire Live

On Sunday 20th January I ran my fastest ever Half Marathon in Gloucestershire (4 mins faster than soggy Bridgwater in 2017) at 1hr 40 mins.  It was a chilly, dry day on a flat course and I started a bit quick and just kept going!  I was convinced I would blow up as I usually do towards the end but I felt good and pushed hard even with a quick stop to say hi to Donna, an ME sufferer who kindly gave me a big bag of jelly babies at mile 1! 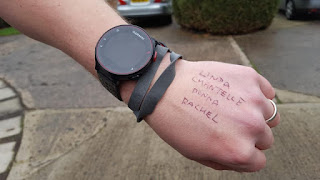 I really enjoyed the race and despite it's poor organisation at the start, it was marshalled well and came with a decent medal and hot showers.  Chantelle and Donna cheered me home alongside Cat and sleepy Lucy and I was invited to the Gloucestershire ME/CFS Friendship Group anniversary meal which was really great. 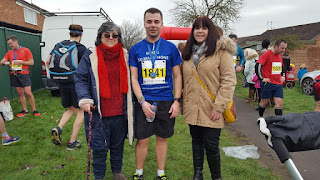 Donna and Chantelle braving the cold to see me finish

The race helped me raise over £600 for Invest In ME and I made some more new friends.  I'll definitely be looking to book a couple more half marathons for 2019, perhaps looking towards South Wales and maybe North Devon where I can hopefully connect with more M.E groups and help raise awareness. 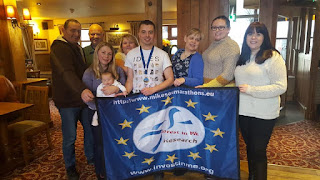 In the pub with new mates and the littlun

M.E Debate in the Houses Of Parliament


On Thursday 24th January 2019 over 40 MPs from across the political divide sat in the House of Commons to debate a motion on ME with 27 making impassioned contributions on behalf of their constituents.
Together they unanimously passed this motion:
“That this House calls on the Government to provide increased funding for biomedical research into the diagnosis and treatment of ME, supports the suspension of Graded Exercise Therapy and Cognitive Behaviour Therapy as means of treatment, supports updated training of GPs and medical professionals to ensure they are equipped with clear guidance on diagnosis of ME and appropriate management advice to reflect international consensus on best practice, and is concerned about the current trends of subjecting ME families to unjustified child protection procedures”.
The debate was encouraging to see and despite the Minister's poor responses it clearly shows a shift in perception of the illness and the final death knell of the disastrous PACE trial.

Amongst many excellent contributions was this passionate speech by Stephen Pound MP:

Passion from Pound, lets hope there's funding and actual change on the way.

It is pretty cold out there this winter so far that's fair to say, but you won't hear me complaining.  I've run for 4-5 hours in 31C at Vienna Marathon, 33C at Luxembourg and over 25C in Malta, Copenhagen, Stockholm, Amsterdam, Barcelona and Gdansk.  Wherever I go hot weather just appears from nowhere.  I'm thinking warm thoughts and getting my head down! 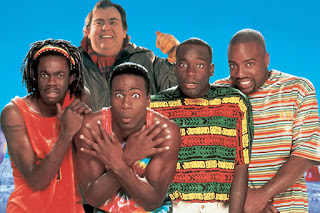 My hands take a mile to warm up but after that I'm totally fine, cold weather gives you a fight when you're running and I revel in that.  There's nothing more amusing than a mummified wrapped up runner looking at you in bemusement as you saunter past in t-shirt and shorts in -3C.  I'm not even warming up if I'm honest, never have really apart from some hip stretches ahead of a marathon race.  I just feel like a prima donna doing it, if I start steady then the first 6 miles or so are my warm up, I never feel like I've settled into the run before the first hour is up. 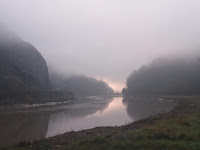 Suspension bridge has gone on hols.

There's ice under-foot at the moment over in Bristol, it could present a problem but I'm lucky to have a mate with a treadmill/dreadmill so if needs must I'll be over at his on the conveyor belt. I've got 6 races this year, if I get one under 20C then I'll be amazed, so for now, the colder it is here the better for me.  I've upped the training to 4 times per week having ran for 9 consecutive days over the Christmas break, I think I'm starting to feel the benefits and my VO2 max is improving gradually.  Hopefully it'll all pay off come March 17th.

Goals For The Next 3 Months


Thanks for your support and for reading.