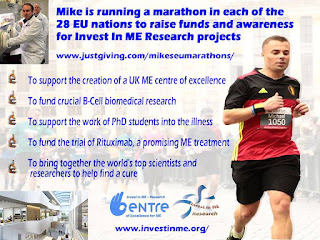 It's been a busy 3 months on the challenge where I've run my hottest/worst marathon, attended my first ME research conference and secured a donation of 250 pies from a national retailer....

I booked my 2nd marathon for next year which will be Vienna Marathon!  I passed through Vienna on my honeymoon and had 2 days to explore, it'll be great to go back to the city once again to run this race. 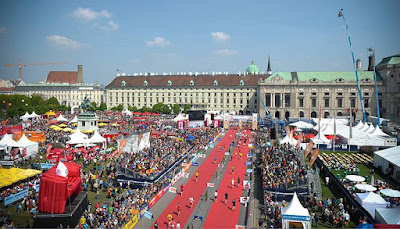 It's a big race in it's 34th year and last year over 42,000 runners all entered with the half, relay and full marathon runners all starting together.

As with last year, May 12th is ME Awareness Day globally and more demonstrations/protests were held across the world to campaign for biomedical research and health equality from their governments.  The protests managed to get quite a bit of publicity, the best of which I thought was over in Dublin below....

There wasn't one in Bristol this time around but it was heartening to see Juli and our Polish support group involved with an online protest.  She's done some incredible work posting news in there and encouraging conversations, now up to 80 members and with an additional Millions Missing page too.

I wrote a quick blog piece about 'Maranoia' 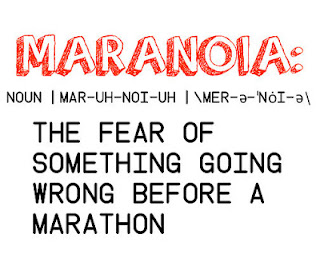 Check it out here!  Maranoia Blog 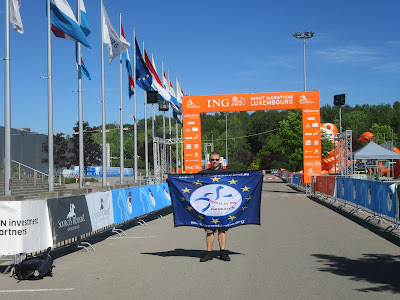 At the start ahead of a super-tough race through heat, hills and tiredness.

Number 11 was an insanely hot (32C at race start) Luxembourg Night Marathon.  My first ever night marathon though in truth it didn't get dark (or cool down) until very late on.  It was a tough course with high elevation in the last 6 miles and it's fair to say that the heat definitely dismissed any chance of a tilt at my PB. 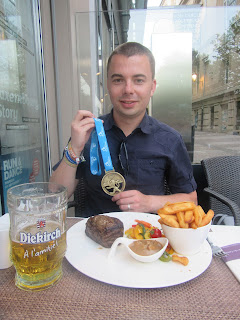 I got round OK though and enjoyed the fantastic support from the locals and the spectacular views on the course.

Invest In ME Conference, London

Invest In ME kindly invited us to the annual ME conference in London and I thoroughly enjoyed the experience. 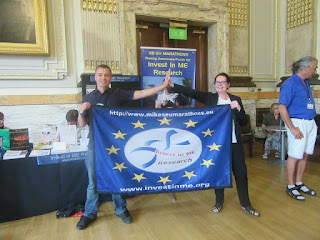 I had a full sized banner next to the Invest In ME and European ME Alliance stands and it was great to meet so many of the amazing researchers and scientists that I have heard so much about.  It was good to meet so many people who have supported and followed the challenge so far too including Emma, Arnold, Helen, Kathleen, Richard, Tony, Nancy, Alice and others. 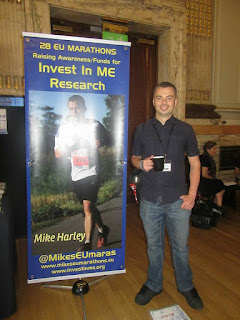 Loved having my own banner!

There was certainly a lot of positivity about the research underway to find successful treatments and with the likes of Professors Mella, Fluge, Davis, Cambridge and co on the case there's certainly reason to feel optimistic that things will improve soon for patients globally. 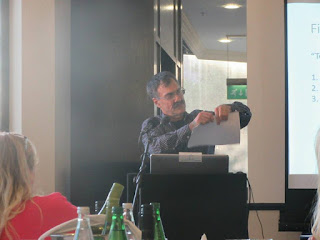 To buy the DVD which has full coverage of all the talks, please click here

I met Helle Rasmussen and partner Keith after our '92 in 92' football stadium challenge for Invest In ME in 2014 and we met up again in Bristol in early June.  Helle does some great advocacy work in Denmark despite having ME herself and has always been a great supporter of my challenges for Invest In ME. 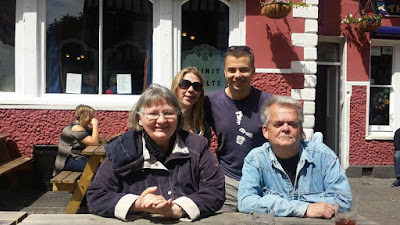 Meeting her again inspired me to shift my plans around and run Copenhagen as race number 17 next year.  I've booked flights and will be formally entering the race as soon as entries open soon.  It'll be my first trip to Denmark and I'm hopeful of meeting up with the Danish ME Association over there. 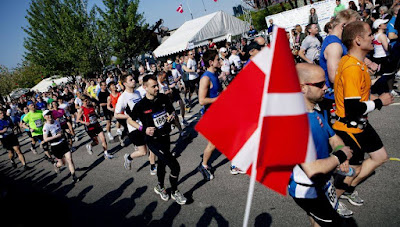 I wrote off to 15 businesses on my street in Bristol for help with the cost of covering flights, hotels and race entries to keep the challenge going. 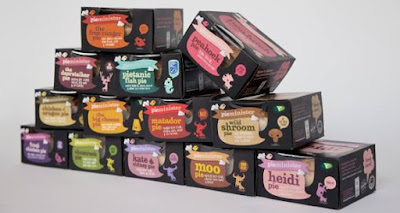 I only had one reply, from Pieminster Pies who have kindly offered me up to 250 pies to sell at a fundraising event.  Just need to figure out what sort of event to put on now!

I had 13 miles down on the training plan for Vilnius and under advice from my physio Martin, I hunted around for a good half marathon race to run it.  I found Frome and was surprised to see how hilly it was!  Being in July also I thought hills and heat would be great training for my autumn marathons.


Entry was a little over £20 and Frome is around an hour's drive from me which was great.  I had a nice message from Becky Hatfield whose daughter Eloise is wheelchair-bound with ME and she said that they'd be keen to cheer me on.  Becky's friend Sally who has M.E also came with Jay and it was great to have a chat with them all after the gruelling little course. 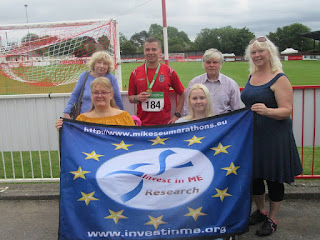 I got around in 1hr 53 which beat my previous half-marathon best (Bath, 2009, 1hr 56) and on a course with 4x the elevation too.  We got a cloudy day and almost perfect running conditions but it was valuable training and great to make new friends.

It occured to me that by the end of the challenge I will have taken 56 flights to 28 countries.  That's a lot of mileage, carboon footprint and take off and landings for someone who doesn't enjoy flying at all.  I'm ok once we're in the air although anything over 2 hours makes me fidget.  I can't sleep outside of my bed even when I'm at my tiredest or after a race so I usually read running biographies or listen to music. 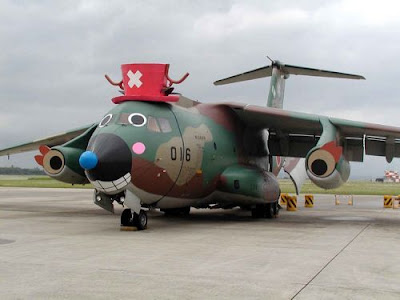 It's amazing seeing the landscapes of the countries we pass over and land in.  I always have seat 7A -a superstition really, it's a window seat furthest forward on the plane without having to pay more per seat.  I tend to book my flights the day they get released to keep costs down but I've fallen foul of this recently as airlines can change the flight times making it impossible for me to make the races -had this recently with Vilnius and had to re-book a more expensive flight, grrr.

Most flights I'm OK but taking off and landings are my major problem.  Cat's hand gets squeezed very tightly.  I've never liked rollercoasters and avoid theme parks at all costs so the point at which the planes wheels leave the ground it's usually panic stations for me. 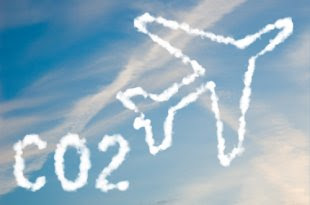 The biggest worry for me about this entire challenge isn't that I won't be able to run the marathons, it's that within 56 flights, it's likely that at least one will be severely delayed, cancelled or at my most pessimistic, crash.  It's the unfortunate part of living on an island that you need to fly everywhere to get anywhere.  I'm actively looking at a way of (non-financially) offsetting my carbon footprint somehow, if you have any ideas how to do this let me know!  The only ideas I have so far are to use the car/public transport less and walk more and stay meat-free (it takes a huge amount of energy to process meat).  Hopefully there's more I can do to limit my damage to the environment.

So with 3 races coming up over a 7 week period, it's essential that I'm at physical peak fitness!  I'm hopeful that the summer/warmer weather training will help me to hit a PB in the autumn races as it did last year and the year before.  October has always been my best month for running and I want that to continue as I aim to go under 4 hours for at least 2 of the remaining 3 races of the year. 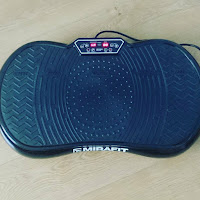 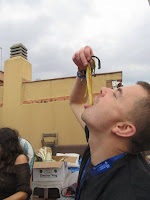 It's important for me to feel that my running is progressing and that I'm getting better despite growing in age each year.  My aim is to drop 14lbs by the next race, which is a tough ask but possible if I stay disciplined (and anti-social), turning down beers/nights out and junk food.  In order to this I've decided to revert back to my vegetarian diet of earlier in the year.  I'm 4 weeks in now and finding it easy to stay meat free with no ill effects.

I've also bought a 'Vibro plate' -yes, I know it's a bit weird.  But I've read positive things about it from runners and it's proven to exercise the entire body.  Standing on it for 15 minutes on it's top speed is a very odd experience but it should help me tone and tighten muscles to enable me to build core strength and help with the latter stages of the races.  Hopefully I'll notice the difference soon!

Perhaps a turning point for press coverage for the challenge, Lina from Vilnius Marathon dropped me a message and we had a skype interview. 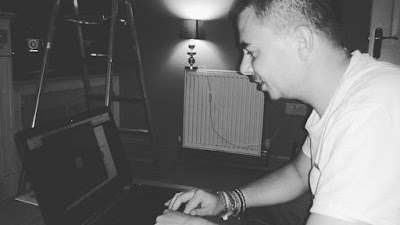 Took a break from painting my lounge to talk to Lina

Waiting for it to be published but it was a pleasant surprise and she seemed very interested in M.E and hopefully we can raise some awareness in Lithuania.  I'm interviewing a patient there currently so hope to report back on their experiences living with the illness soon.

So next up is Vilnius Marathon on September 10th (number 12 of 28).  Unfortunately it's quite tricky getting to Lithuania so I need to change flights at Warsaw, hopefully I've allowed enough time.  I'll be flying back almost immediately after the race too as Cat needs to work on Monday, fingers crossed I'll get a shower first and that our flights aren't delayed! 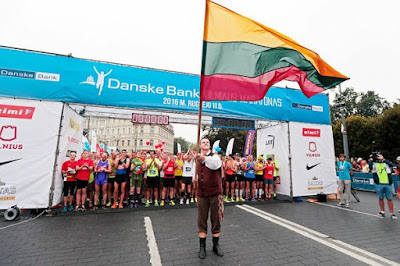 After that it's Amsterdam (Oct 15th) and then Ljubljana (Oct 29th), this will be a real test and it's vital I'm in peak shape to take on the challenge.  I've never done 2 in 3 weeks before so it's going to take a lot of physical and mental strength to get out of October in one piece.

Thanks again for all of your kind support, if you'd like to make a donation to Invest In ME's amazing research projects to find a cure for M.E then please visit: