Just catching up with a quick Spring update as the next race hurtles towards me!

So what's being going on? 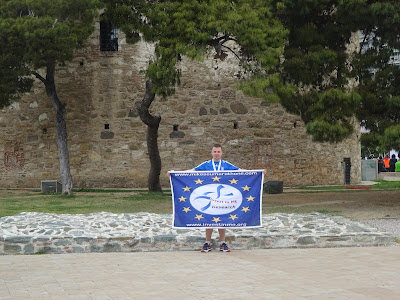 Flying the flag in front of the White Tower

Well since my last update at the end of February I have.... 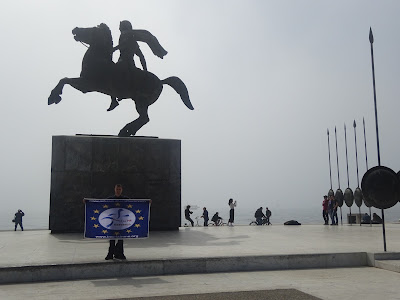 On April 3rd I managed to finish Greece's 2nd largest marathon, running into Thessaloniki besides the sea towards the famous White Tower.  Full race report here and pics here 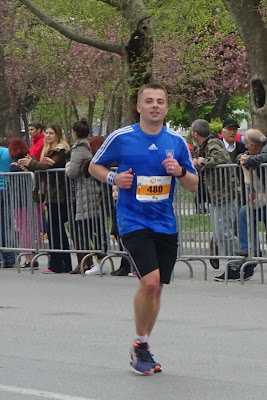 Looking back I can say it was a great start to the year, a lot of things could have gone wrong but fortunately I'd done just enough training (pretty much from scratch after a 2 month break) and got round without too many problems.  Thessaloniki is a great city, not as historic or picturesque obviously as Athens but some great sights and a nice weekend break.

As well as completing the race, the aim was to raise awareness about what it's like to have ME in Greece.  I'm pleased to say that my interview piece with Lefteris was easily the most read part of my website of the year so far and has been read/shared over 3000 times from over 15 different European countries.

Over the last few weeks I've also had my first video diary out, introducing the challenge and attempting to answer some of the questions put to me on Facebook and Twitter.  Check it out here:

So with Greece done and 23 more countries left to visit it's time to move on to training for Stockholm (04.06.16) and with it a shift in tactics to introduce more hill training.

As I'm now in the 2nd year of the challenge with 5 down and still a heck of a long way to go, inevitably people are asking me if I'm getting bored or still feeling as motivated to complete this lengthy challenge.  The answer for me is that, if anything, I feel like I'm now beginning to find my running rhythm.  The first half of last year was about getting up to the level of fitness required to simply finish a race after so many years of a sedentary lifestyle.  I now have confidence in the plans that I create for each training race whereas before I was making it up and hoping for the best.  The turning point for me was the training for Dublin last September.  I really committed to the plan, eating/drinking properly and I got that lifelong ambition of a sub 4-hr marathon (just!). 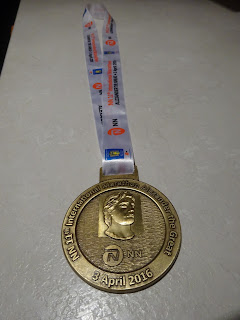 I'm actually enjoying having 4 races this year and not 3.  That's 4 trips abroad, more people to meet and not long to stew on a poor race or to get that marathon buzz again.  I know there's a lot of people out there who don't think I'll complete all 28 and will give up at halfway or less, I'm afraid you're going to be disappointed!  I'm not really one to start something and leave it unfinished.  By the end of August I'll be more than a quarter through the challenge, another mini-milestone.  I totally accept that it won't be until I get 20 races done that the papers and running mags will reply to my emails and requests for coverage (and a platform for ME sufferers).  That's OK, I'm here for the long-haul and part of the experience is the time spent learning about running from people I follow and in some very minor way, sharing the struggle of the people that I'm trying to help.

I'm varying my training routes, terrain and elevation to keep things fresh.  I'm also writing blogs to try and reach communities of people outside the ME world; that's as much a challenge as the running itself.  Training is relentless but almost now the norm.  If people ask me if I'm free on a specific date to do something, my first thought is, am I running that day?  Friday nights are off limits -I need to run long on the weekend.  Tuesdays and Thursdays are tied up until 7.30pm as I run home from work.  Nothing gets in the way of training.  The consequences of not doing enough come race day are physically and mentally too awful to consider.  I'm not flying all that way to walk the course feeling low and like I've let everyone down.

Am I still focused?  Yep, I mean no, what was the original question?!

In my next update I want to talk a bit about RME -the Swedish ME Association (*Spoiler Alert* -they're doing some fantastic things for patients there) and also what it's like to have ME over there in Sweden.  I've got a long over-due back treatment coming up and the hardest month of my training to date as I get ready for Stockholm's infamous hilly bridges.  May will see me running on the beaches of The Gower, the lanes of rural Dorset and hopefully back on my favourite tow-path to Portishead.  Also my good buddy Ben Scott will be taking on Belfast Marathon (May 2nd) for Invest In ME -best of luck mate!

Thanks again for all your support!

www.justgiving.com/mikeseumarations
Text IIME82 and £3 to 70070