May has arrived and the challenge is now 3 years old!  I've run 2 more marathons and 1 half-marathon since my last post adding an additional £1600 for Invest In ME.

On Feb 25th I ran my 15th EU Marathon starting in Mdina in the Maltese countryside and finishing at the coast in Sliema. 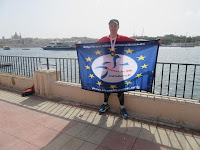 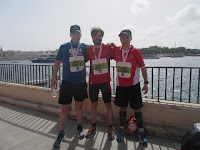 It was a tough race with a very early start with the temperature hotting up from 14 to 23c by the end.  I got round safely despite a really bad cold and two bad calves.  Full race report here. 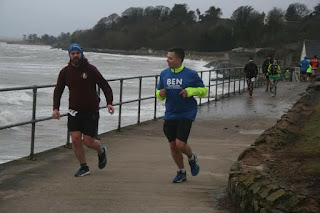 I can't tell you how cold it was here

A couple of weeks later I flew over to spend St Patrick's Day in Belfast with my buddy and fellow Invest In ME marathon fundraiser Ben Scott.  After taking on a lot of Guinness we went for a bit of a run as part of the East Antrim Marathon Series, both earning ourselves a fantastic giant bottle opener medal for running the minimum required distance of about 4 miles!

We had a beer on the way round in bitterly cold conditions and stopped to cheer the proper runners under a bridge, joyously finishing joint-last!  This was the weekend when it snowed loads over in England, we got stranded in Belfast for another night.  Not a major problem as there were plenty of pubs to shelter in! 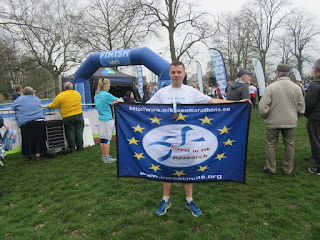 Getting back to proper training for Vienna, I told my Facebook page that I'd run Devizes if they could help me round up my sponsorship total to the nearest hundred.  They duly obliged and I entered the hilly, chilly Devizes Half.  It was a well organised and supported course which I really enjoyed, lots of uphill but equally some really fun downhill and I was pleased to come away with my 2nd fastest Half time of 1hr 49 mins.

After the race I met with Roger and Michelle Bourlet from Devizes and their family.  They very kindly let me use their shower and fed me delicious cake.  I heard more about their daughter Maddie who is bedbound with ME and I got to pop my head in to say hi.  It was really shocking seeing and hearing how the illness had affected her and I really hope she improves soon and wish the family well. 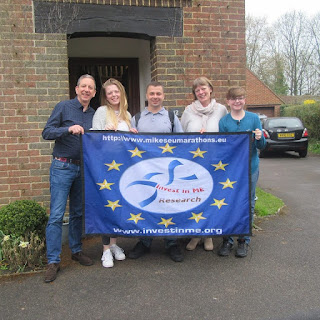 Roger and Michelle very kindly donated £500 to Invest In ME's biomedical research projects and I was pleased to hear that Michelle would be at their conference in June, hopefully we'll meet up. 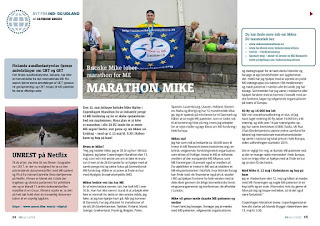 Some nice coverage in Denmark ahead of my trip there in May for number 17.  Thanks to Helle Rasmussen and the Danish ME Association for the interview and 2 page spread in their monthly magazine.  I'm working closely with them to see if we can take advantage of the May 12th ME Awareness Day and get some exposure for their work in Denmark and highlight the necessity for biomedical research.

I spoke to Sebastian, Barbara and Sonja who are 3 people with ME living in Austria.  Click here to see what they had to tell me. 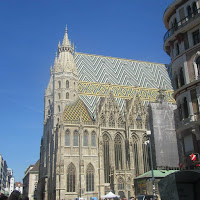 Back in beautiful (and crazy hot) Vienna

It's clear that like much of Europe, there's a real lack of knowledge and understanding about M.E. in Austria.  More stories of patients being misdiagnosed, told there's nothing wrong with them and being denied basic human rights.  But at least the new Facebook group CFS Hilfe is uniting people and starting to make waves over there.  I wish them the best of luck as they've been really supportive to my challenge.

Over Easter we went to Pembrokeshire and I decided to get in some beach running on the 7 mile long Pendine Sands.  Pendine is the stretch of beach where Malcolm Campbell broke the world land speed record (146 mph in 1924), it was great to be running in his tyre tracks.  I got 11 miles done, having to turn round when the sand got very deep and the tide started coming in! 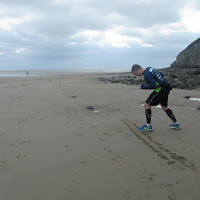 On your marks. Won my 1 man race

We stayed at Pendine Sands B&B who very generous and sponsored me as well as posting on their Facebook page about the challenge.  It then occurred to me that I need to leave more of my 'business cards' where I stay and meet new people in order to get more donations and publicity for ME research.

I got a little bit of press in the Wiltshire Gazette just before (and after!) Devizes Half.  No picture and they were a bit abrupt but hopefully someone saw it and maybe changed their mind about M.E. 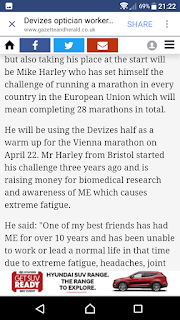 I also had a nice 'retweet' from the organisers of the half marathon and BBC Radio Wiltshire got in touch for an interview, then went quiet on me -something I've become a bit used to on the challenge at times.

After a couple of successful halfs last year and one this year so far, I thought it would be good to keep motivated with a couple more hot, hilly halfs until Estonia in September.

Heron is the nickname of RNAS Yeovilton and I'll be running the half marathon there on June 10th.  It looks like a decent race and there's showers and a bbq happening afterwards so hopefully will be fun.  As ever I'll try to reach out to local papers and see if we can get some more donations in. 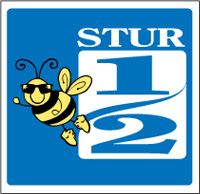 Sturminster Half in Dorset on Sunday August 5th is a nice little half in the countryside and should be a good challenge.  Looks like it's organised by a friendly running club and it's got good reviews so more than happy to give it a go for the first time too.

Before last year, I was quite indifferent to running Half Marathons as part of my marathon training.  I didn't really see the point of paying c£50 to run them when I was already running further around the streets and cycle paths near my house.  I ran Bath Half a couple of times before I started the challenge and both experiences left me a bit cold really.  They were large, over-subscribed and poorly organised races that were expensive and frustrating.

But I've had a bit of a change of heart more recently.  I ran Frome Half and Bridgwater Half last year and felt good about them.  I was able to meet supporters and patients, post some decent times and take advantage of challenging conditions (Frome; hilly.  Bridgwater; torrential rain) which could have only been positive for my training.

Some positives that I've found which have driven me to book some more....

I've got a new shirt to wear at the halfs.  Carefully designed so that those running behind me can educate themselves on M.E. 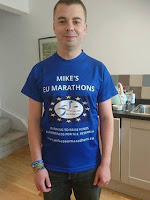 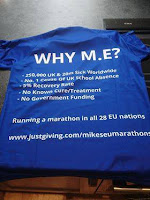 From a training point of view, 13 miles might not be as far as say a 17 mile run that I have on the plan but in a race situation I will inevitably work to a higher intensity which again is good training.  Also as I always seem to struggle at the end of marathons, it feels good to finish a half marathon, it's more my kind of distance and I can drive for wet weather/flat/hilly/hot PB's.

Another Spring marathon and yep, another one at 30C.  Not at all what I was expecting but I got through it in one piece.  My second slowest time so far but it was an impressive course with some fantastic views of the Danube and stunning architecture.

My race report for Vienna can be read here 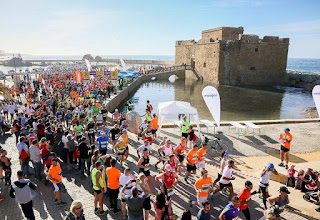 My first race of 2019 and number 21 of 29 will be Cyprus Marathon in Paphos on March 17th.  I had the choice of Cyprus or Limassol marathons on the island but chose the former as the airport transfer was easy and the course was more historic and not just all coastal.

I know I can expect a warm race there but I've got a bit longer to train over the Christmas break so hopefully will have enough time to train well and give it a good go.  It'll be my first trip to Cyprus and I'll be aiming to spend more than just 36 hours there as I've had to recently with the trips. 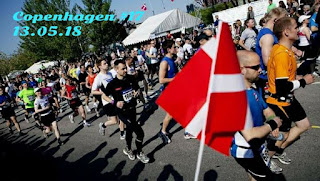 As I type, Copenhagen (number 17) and International ME Awareness Day is just over a week away!  I fly in the day before and I hope to meet meet up with any patients who are well enough and if possible any local media who might be interested in the challenge.  I'm working on approaches to the press in collaboration with the Danish ME Association.  Also Copenhagen Marathon have also asked for more information which is great.  This weekend I will be recording a message in support of people with ME in Denmark to be shared on online for May 12th.

Hopefully we'll be able to do a quick boat trip and see a little of Copenhagen before I make the start line on Sunday morning.

So all in all a very busy, challenging but fully worthwhile 3 months!


If you'd like to sponsor me you can do so below!