Hi all, so I'm through relatively quiet race-less 3 months and a week away from race 15 of 28 in Malta!

November was mostly spent recovering from the two marathons in October.  I went to a few gigs, ate and drank copiously and firmed up my plans for 2018. 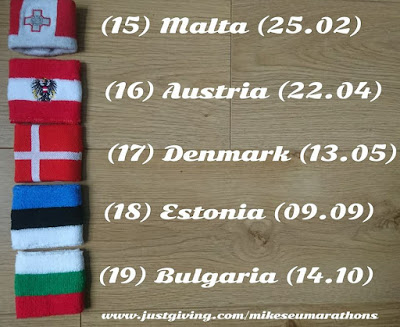 Bit of everything here!

First trips to Malta, Denmark and Estonia here, been to Austria and Bulgaria previously.  Expecting a bit of rain and mild conditions in Malta (15C), then the next 4 could be anything really.

With Malta in late February I needed to run through December and the Christmas period for the first time so far in 3 years of the challenge.  Usually I take December off as my first race of the year is March/April so it created a few logistical challenges to get the long weekend runs done. 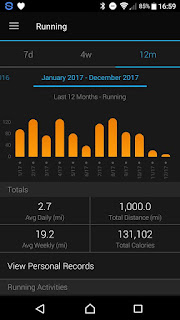 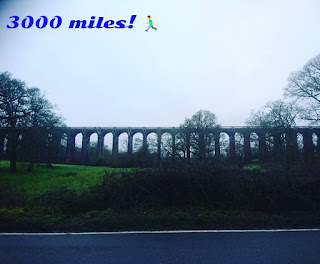 I had to take it easy with gigs/parties and make sure that if I went away for the weekend that I still got in the important Saturday run.  Very tricky but I got through it fine until the very end of December.

News came through in November that Phase 3 of the Rituximab Trial in Norway had produced a negative result.  This was a major blow following the promise of the first two phases and quite unexpected but useful data has been collected which hopefully can be used to understand the disease better.  They have my full confidence that the money they've crowd-funded for the trial from patients will be used to the best effect. 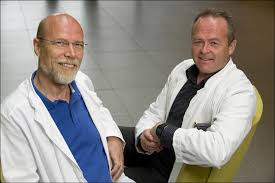 Statement from Invest In ME:

The statement from Haukeland University, Bergen from Professor Mella is a major disappointment for people with ME and their families.

What had looked to be a promising line of research that could lead to an effective treatment for a subgroup of patients defined by the Canadian Criteria and major understanding of the pathology of this disease has proven to be inconclusive.

We are very disappointed also for the Haukeland research team - a wonderful team who have brought hope to all patients - and, importantly, brought new insight into this disease and new interest from other areas.  However, we have found, throughout 12 years of trying to change the way that ME is perceived, researched and treated that it is never easy.

It would be easy to give up, to resign oneself to nothing changing, to accept the status quo.  But we think differently.

We see the positives in this research which has been performed by researchers of the utmost integrity who have not made headlines for the sake of it but have thoroughly conducted outstanding research, and still retained a humility that is to their credit and that of their colleagues and team.

We have an excellent research team in Norway which has served the ME patient community and their families with honesty, integrity, professionalism, determination and an empathy which had never been seen before in this field.

We have established good working relationships between the Norwegian researchers and the UK Centre with input from UCL and UEA/Quadram Institute.

We have data now – more than before.  We have research which IiMER has established and a foundation for the Centre of Excellence for ME.  We have international collaboration in research into ME that will continue.

The researchers from Haukeland will give more detail on their results and publish a paper or two which will benefit all studying ME.  For us, we have invited the Haukeland team to Norwich to discuss the way forward.

We remain positive. Another setback, another day.

We have already been in discussion with our advisors and with the Norwegian team and we will meet to clarify the best way forward in the near future with our major funder and researchers.  We still have much good research being funded and being planned and feel our strategy is, and will pay off and lead to the most rapid route to finding cause(s) of ME and effective treatments. 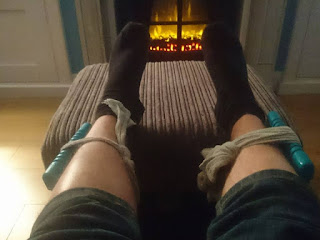 For the first time really since I started running I had some quite difficult injuries in late December up until early February.  I'd hurt my achilles and then both calves from possibly taking on too many hills as part of training and was laid up for 2-3 weeks after a few false starts on runs having to limp home after a mile or so.  After resting up and a sports massage, chiropractor session and lots of ice/heat applications I eventually got back out for the long runs at least.

I wrote a blog on how I was doing: here

I was introduced to the Malta ME, CFS & Fibromyalgia Alliance who have been very receptive and helpful to the challenge.  They've written off to local media with my press release and have posted on their social media sites too.  From looking at their work, it appears that they're doing some really good advocacy there for patients and providing vital support to the community. 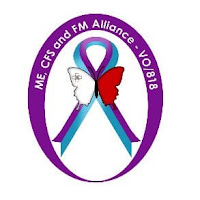 Malta is legalising medicinal cannabis to be prescribed by doctors for pain relief for people with chronic illnesses which sounds like a major breakthrough.  More info here

I spoke to them about life with ME in Malta and here's a summary of what I found out.  I'm hoping to meet anyone well enough when I arrive for a chat, who knows maybe there might be a last minute TV appearance!  Malta Marathon very kindly posted a piece on my challenge on their Facebook page which has had over 50 shares and helped bring in more donations to ME research. 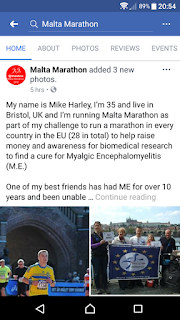 The annual conference featuring the world's best researchers and scientists is back for it's 13th time in London on June 1st and I'm delighted to be invited again.

I'll be live tweeting throughout the full day and hope to hear some positive updates from the likes of Ron Davis, Mady Hornig, Oystein Fluge and many others.  For more information on this world-leading conference click here.

Scottish MP Carol Monaghan has secured a 30 min debate at Westminster about the widely discredited PACE trial which has done so much damage to people with ME in the UK and across the world. 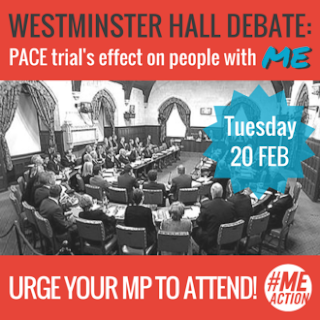 I've written to my MP Karin Smyth (Bristol South) but she hasn't replied sadly.  This follows hot on the heels of a screening of the film Unrest at Parliament, hopefully the government's perception of this illness is starting to change.

Ben and Jay in Malta

I'm lucky to be joined by fellow Invest In ME fundraiser and good mate Ben Scott for the race in Malta.  Ben has previously run Dublin and Barcelona marathons with me on this challenge and he'll be joined by his brother Jay who is taking on his first marathon! 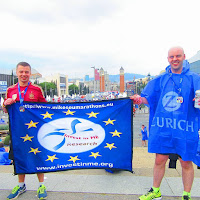 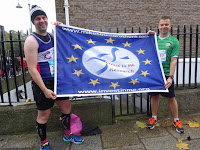 Thanks all for your support through my injury period and with recent ramp up in donations, delighted to say we've got over £10000!! 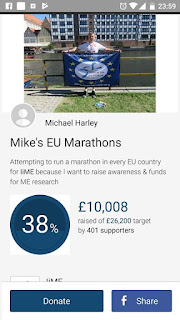 If you'd like to sponsor me you can do so below!