Happy Christmas from Lanzarote everyone! 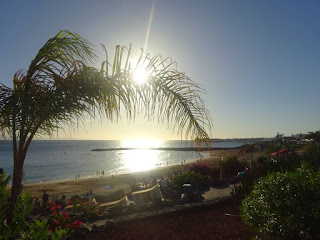 I've been hibernating since the end of Oct and Dublin catching up on good (and bad) food, cidery delights and my former sedentary lifestyle.  I'll be starting to train again properly on Jan 3rd with 3 months to get ready for the next race, the Alexander The Great Marathon in Thessaloniki (Greece).

So I've been taking advantage of the big gap between marathons the last two months and giving my dodgy knee a bit of a break.  As I write I'm stuffing my face in my winter training camp (yeah right!) in Playa Blanca.  No races between Oct and March/April is a bit of a pain if I'm honest, it happens as most of Europe will be too cold/wet for the events to take place so they tend to prefer to put them in Spring and Autumn, presumably when the climate is more appealing to runners.  When you're keen to do 28 races as quickly as possible then this can be quite frustrating!

As it doesn't really take more than 3 months to train for a marathon it made sense to train down and rest up over the pre-Christmas break.  There's the inevitable parties, events and invites over this time and with Thessaloniki such a way ahead I knew it would be difficult to avoid situations where I'd be eating and drinking a fair bit.  The knee is fine, probably a bit weaker for the rest in all honesty and I've enjoyed piling on the pounds happy in the knowledge that they'll soon be falling off again.  With 4 races lined up next year as opposed to 3 this year, I'm aiming to get to a better weight to bring my times down and ease the pain of recovery.  If I can be as prepared and fit as I was for Dublin then I will feel ready to get through all 4 without incident.

Whilst I've enjoyed the rest and chance to eat pie and drink more, I find myself now excited about getting back down to it.  I've been out running 1-2 times a week (though not much more than 4-5 miles) and without much motivation and I've realised it's going to be a long hard road back to race fitness.  When I started the challenge last January I had a few short runs under my belt and I can probably say that I'm in a similar state of fitness to back then.  The only big difference is the running experience that I can now call upon when things get tough and painful. 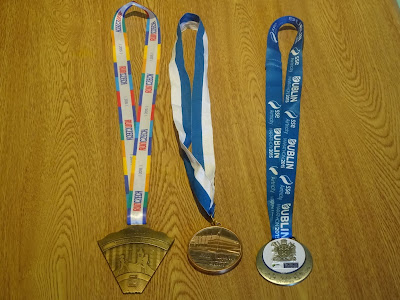 I've realised that without a training plan or end goal (marathon), I am just not someone who can go out and run for fun.  It's not part of my lifestyle although for 10 months of the year it is an all-consuming quest.  Having looked forward to not running at the same frequency or intensity all year, I can say that the novelty has well and truly worn off.

My advice to kids, wannabe runners and those with more experience; never take time off, keep on going!

How I pick the races

I've had lots of requests from followers around Europe to come and run in their country soon so just wanted to highlight the rather complex selection process that I have at the moment. 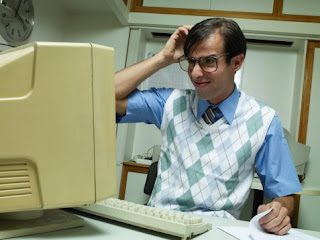 So there you have it, not an easy task but glad to say that 2016 and 2017 look relatively straightforward, after that things will get tricky!

So I've talked enough about me.  Let's talk about ME (sorry!)

You may or may not have been following but the last couple of months have been very eventful within the ME world.  There's been a widely celebrated critique of the bungled PACE trial by David Tuller with the help of ME patient and hard-working advocate Tom Kindlon.  PACE was a trial funded by taxpayers (£5m) published in 2012 that ultimately recommended CBT (Cognitive Behavioural Therapy) and GET (Graded Exercise Therapy) as a treatment for doctors to prescribe for ME patients.  It's results were based on bad science and were manipulated by those who have made a career out of their insistence that ME is a psychological illness.

Following this a request was made by James Coyne for the data of the trial to be released.  This has been denied by King's College London for a variety of ridiculous reasons (one of which is to keep patients anonymity even though they have admitted to already releasing some of this data, another that the researchers on the trial might be threatened by patients) and as a result has destroyed their reputation and credibility by scientists worldwide.  The journal where the PACE trial was published (PLOS One) is now seeking legal advice as they only publish if data is openly available for review. 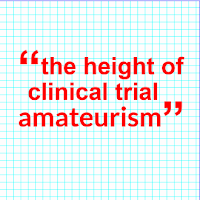 In short, if the data is released it is very likely to show the flaws in CBT and GET that most patients know first-hand as the treatment actually makes them much worse.  Bad science practice from such a high-profile and important trial and a retraction from the Lancet amongst others can only mean that new treatments and a shift in how ME is perceived ona  grand scale is inevitable.  Even some of the old-guard in the psychiatrist community with connections to the Medical Research Council appear to be shifting their standpoint in preparation for this. Very interesting.

To read Invest In ME's call for the retraction of the trial in the Lancet, please click here.

I'll be back in Jan with a reminder of my plans for 2016 and more info on the races, I've printed off the training plan and not long until I'm back out there. 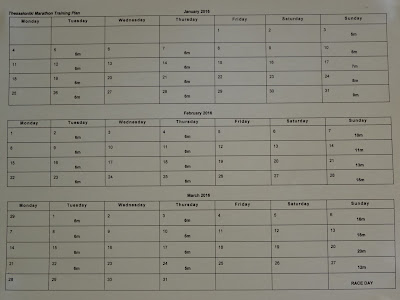 For now though, I hope you all have a fantastic Christmas break and thanks again for all your support in 2015.