It's Summer!  Finally, sort of, over here in the crazy UK.  So much to bring you up to date with if you haven't been following my semi-regular Facebook page. 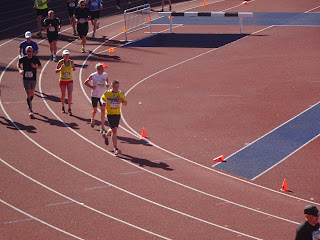 The bend before the finish line!

First up a quick word on Marathon #6: Stockholm on June 4th!  Well it was a really amazing trip.  I got round in 4hrs and 5 mins which I was pretty happy with given the heat on the day (25C) and the hills.  The course was great, taking in some fantastic views and with some decent support in the built up areas. 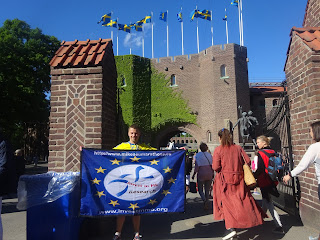 Finished! Outside the Olympic Stadium

It was my first trip to Sweden and came with many highlights including getting over to the beautiful Fjaderholmarna island and Skansen Park the day before as well as meeting up with ME patients Susanne and Catharina immediately after the race. 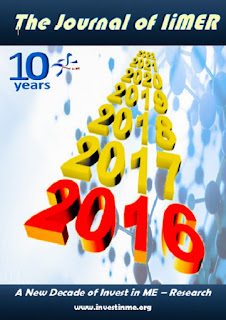 I couldn't make the conference due to being in Sweden but I heard it was a fantastic success.  If you'd like to find out what was discussed then there's some very useful info/links below.

Invest In ME report on the Conference

They also managed to raise some money for our cause with a collection tin at the conference which I've added to the justgiving site.

I'll try and get to the next one guys!  Won't be racing that weekend next year.

First up, I've booked my 2nd race for 2017 (to follow Barcelona Marathon on March 12th) and it's going to be the exciting Luxembourg Night Marathon.  Exciting for many reasons, not least that it starts at 7pm which will no doubt be the latest kick off of all 28 that I do.  It presents all kinds of dietary conundrums but hopefully I'll be able to deal with that, I get a lie-in I guess!  Will be strange finishing a race at circa 11pm, eating dinner and going to bed! 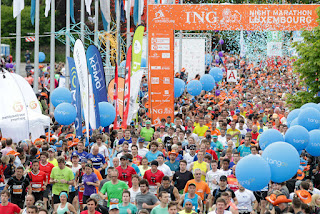 I've never been to Luxembourg and really don't know what to expect from it.  Maybe some cobbled streets, smart alfresco restaurants and nice squares mixed in with some imposing business-district buildings?  I'm not sure given the small population that I'm likely to make contact with any ME patients/groups but I'll certainly try to look and do what I can there. 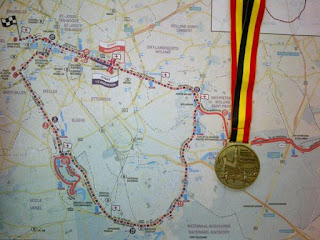 So, the other change is a very last minute entry into Brussels Marathon on October 2nd this year.  I toyed with this a lot.  Major considerations were cost and whether I could physically do 2 marathons in 3 weeks.  But as I'm feeling good and could get cheapish flights and accommodation I thought I'd give it a go.  I've been to Brussels before but only for a few hours before heading off to Bruges (where I proposed to my wife, Cat).  We went to the main square and it looked amazing, I'm looking forward to going back and exploring it properly.  I've already made contact with Nancy Van Hoylandt from the Belgium ME/CFS Association (already members of the European ME Alliance) so hopefully we can meet up and get some press/raise awareness on this one.

In June I managed to interview Mira from Warsaw about what it's like for ME patients in Poland.  The article has so far received over 5,000 views and has been shared over 100 times across a number of sites.

The piece focuses on the continuing struggle around the perception of ME in the country.  Not only that but where there is an interest in the illness, upon further research it's clear that exercise therapy is the most favoured form of treatment prescribed.  As we know this only makes patients worse and it's no surprise that they're not keen to come forward for help at this particular clinic.  I'll continue to try to find doctors and researchers that advocate biomedical research, hopefully we can put them in touch with the European ME Alliance.  There's approx 150,000 people suffering with ME in Poland, the challenge is as it is with many countries in Europe but hopefully things will improve with recent breakthroughs and developments ocurring elsewhere. 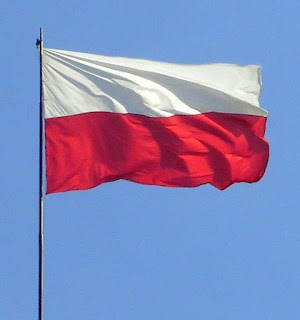 Mira has been really helpful (despite her severe ME) with giving me media contacts and I hope to have something to report on this soon.  I was really happy that ME Action were able to feature it on their site, which has become a hugely successful platform for information and news.

I decided that I needed a focal point for bringing together Polish patients and that setting up a facebook group would be a decent start.  There didn't appear to be any in existence and I thought it would be a good way of getting people to talk, help each other and share knowledge. 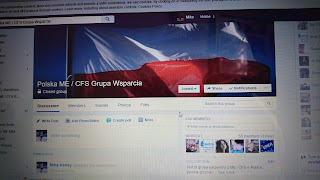 With the help of Juli Persson (a Polish speaking ME patient), it grew to 55 members within the first 48 hours and I'm hopeful that now I've taken a backseat to let it grow organically, it can make a difference to someone, whether they themselves are Polish, or maybe their carers, family or friends. 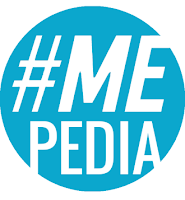 Big thanks to Karen Denmark for putting me onto MEPedia -a crowd-sourced encyclopedia of ME/CFS.  Hopefully it'll get some decent traffic and inspire others to take up challenges to raise funds and awareness.  MEPedia is an initiative by ME Action -I'll be at their #MillionsMissing protest in Bristol on Sept 27th -more on that next month! 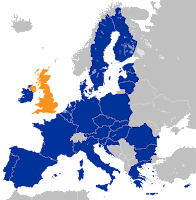 I couldn't write without mentioning the infamous referendum.  I'm not going to get into my thoughts on the result, I don't want to upset people or lose supporters.  What I will say is that it took me a fair few days to try to figure out the impact on this challenge.


Conclusions:
There you go.  I'm carrying on.  Maybe i'll try and do it quicker so the EU isn't a distant memory when I've finished. 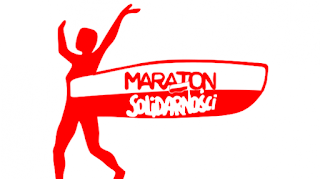 Just a few lines on the significance of this unique race!

The Solidarity Marathon commemorates the workers who were killed by the Polish communist army and police during the strikes and riots of December 1970 in the area.  The race is always held on the 15th of August (a public holiday and the feast of the Assumption of Mary, an important feast day in Poland).

The uprising was in protest to a sharp rise in the cost of food and everyday items by the ruling communist government and saw those working in the dockyards in Gdansk, walk out on strike in protest.  After other workers did the same across the city and tri-city region, they were met with fierce aggression by the militia who shot dead a number of the protesters.  Demonstrations and strikes broke out in Gdansk, Gdynia and Szczecin in the north, which were brutally suppressed by 27,000 communists troops, and a hail of bullets were fired at workers in Gdynia on 17 December, with 42 killed during the month-long protests and over 1,000 wounded.

The price increases were abandoned shortly after, and the uprising was seen as the catalyst for change and the first time that communist rule was seriously challenged in Poland.  In August 1980, after more strikes, the Solidarność ("Solidarity"), the first independent trade union in a Warsaw Pact country, was born at the Gdańsk shipyard.  Martial law was declared in 1981 and the struggle continued until communism fell and the country transitioned to a liberal democratic political system after 1989.

There is a ceremony prior to the start of the race at The Victims of December 1970 Monument in Gdynia which is said to be very poignant.  It's not too hard to see the parallels with the ongoing fight that ME patients worldwide have with their governments to get the respect and treatment they deserve.  We must keep pushing them and force a change. 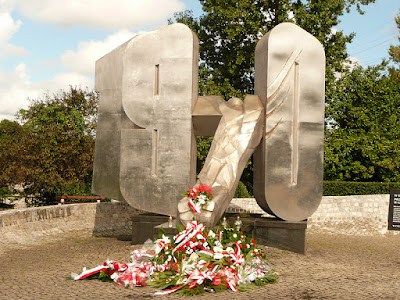 There you go, you're up to date now.  I've got 2 weeks until the next race, got my Zloty's sorted and I'm taking a keen interest in Gdansk weather and webcams.  I know this one won't be my best, it's likely to hit 30C whilst I'm out there, there's only 700 of us running with traffic and with very little crowds.  I think it'll be the toughest one I do but I feel like I can get around OK.  I've got a new phone and will be posting the odd video update along with my usual tourist pics of the town.

It would be amazing to hit £4K of donations to biomedical research and Invest In ME by the morning of the race!

If you can spare just £1 I would really appreciate it!

www.justgiving.com/mikeseumarathons
Text IIME82 and £1 to 70070
Catch up soon!