Heading up to 4 years since my first marathon on the challenge!  It's been a testing 3 months in my world.  I've completed 2 more races; Cyprus and Slovakia and a few weeks away from my 3rd marathon in 8 weeks over in Latvia.

I've had two colds, tonsilitis, tendonitis and a really scary flight.  It's been the hardest section of the challenge so far, trying to get enough sleep with a small noisy baby to train and an increase in responsibility at work.  But pleased to say that so far I'm just about holding it all together and with just 7 races left I'm starting to think more about what to do when I'm done. Unfortunately I wasn't able to find anyone with M.E to interview in Cyprus so raising awareness there wasn't really possible.  It was a bit surprising given how many english speakers there are there but I know from my trip to Greece that there aren't many/any communities there for people with the illness and it's almost unilaterally ignored by doctors and government.  I did meet someone with M.E immediately after the race who saw my flag and we had a quick chat, she was very kind enough to sponsor me. 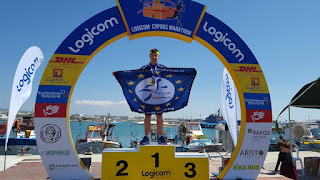 One day I'll win a race for real, maybe.

I went into this one feeling like I'd trained pretty well but unfortunately as I tapered training I picked up a cold which meant that it was a very hot snotty run.  I've always been surprised by how much a common cold can affect running. It's not just feeling light-headed and difficult to get a good breathing rhythm, it seems to make quads heavy and has a big affect on increasing heart rate.

In the end I got it done, full report here 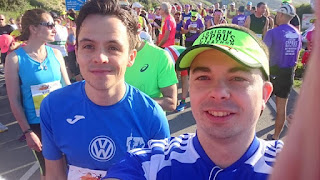 Geordie Mark, great guy and impressive mara list for one so young.

I really enjoyed meeting fellow european marathon collector Mark Openshaw before and after the race.  He was on his 20th country too and it was great to swap stories on the races we'd completed and had lined up. I know that Mark really values running as a tool for positive mental health which I share too (more on this later). 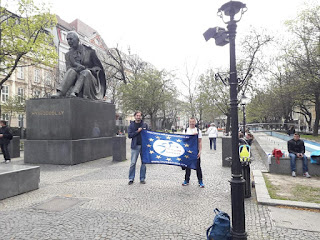 Ahead of my trip to Bratislava I interviewed Michal who has M.E.  I also met him for a drink after the marathon and he told me about the work that he was doing to try and raise the profile of M.E there.  Click here to read more. 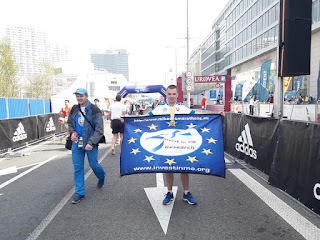 Tough but an improvement on Cyprus.

Coming into this one I had real problems with achilles tendonitis, it was a little painful to walk so I had to make sure I had enough painkillers for race day.  My friend Mike was good enough to come with me as he had in Sofia in October when Cat was too pregnant to fly.  On this occasion it was a bit too expensive to fly Lucy and Cat out with me for just one night so it was great to have some company. 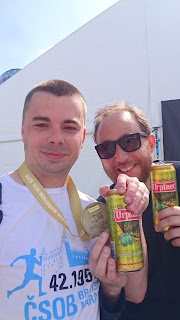 Always there with a beer at the end, top friend.

We had a good tour of Bratislava, heading to the Expo, Old Town and Castle with some time to have a cheeky beer in the sun.  Race day was almost perfect conditions for the first half then warming up, click here for race report.

My first real run-in with Brexit occured in February when I was ordered to surrender my website as it ends with '.eu'.  Hopefully I've figured out a way around it without losing the domain.  I guess it's a sign of things to come as we get closer to leaving.  I have definitely noticed that it's been harder to get publicity through the marathon races and papers this last year or so.  I can't help but feel that as I'm from the UK, there's a bit of anymosity there, I can't really blame them.  The arrogance of how the UK government has treated the process would have me struggling to respect anyone wanting a favour too.  When I interact with new people in Europe I can definitely feel an uneasiness coming from them when they realise I'm British.   I'm certainly glad to have run so many races before the Brexit debacle that's for sure.

As I type I'm currently unable to run through injury.  It's fair to say I've led a bit of a charmed life when it comes to injury, I've not been able to run maybe 3 or 4 times in 4 and a bit years so I can't complain too much.  But two races in a 6 week period with another one around the corner is taking it's toll.  I've got problems with both calves again, hopefully I can sort with another massage as I can't get beyond a mile without the pain stopping me from continuing.  On top of that I've got a groin strain and lower back which is uncomfortable rather than run preventing. 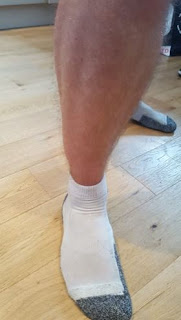 Martin, my massage guy took one look at my trainers and reckons they've been the problem.  He literally folded them in half and looked at me with a grin on his face.  They've only lasted 150 miles as opposed to the usual 300-400 but two long continuous runs (4-4.5 hrs) where your running form deteroriates the longer the run goes on, are enough to wreck them nicely.  If you can bend the shoe in half then there's no support at all and it leaves your calves is exposed to strains.  Needless to say I've immediately gone out and bought some but the damage is done for now.  So I'm having a complete break from running until race day.  I know I'll lose fitness in this time but Riga will be about completing it not a tilt for PB so I feel like the pressure is off on this one.  Maybe by running slower I might even enjoy it who knows!  I'll loosely aim for 4.5 hrs and then focus on re-building for the 3 autumn races where I usually do my best running.

I'm keen to talk about mental health for the first time on this challenge.  A lot of people have asked me if I'm feeling mentally fatigued with the challenge.  I guess this is because I've been posting a bit less on social media (mainly down to time limitations with work and baby) and also I'm guessing they're wondering how I stay motivated after all this time.  The truth is that I'm not fatigued, I think at the moment I'm just a bit down on how some of the races have gone and the lack of improvement I've been showing.  Outside of being an elite runner I think it's chemically impossible not to feel happy about finishing a marathon.  But for 18 out of 21 races I've come away with regret as to how I've run even though I know I've trained pretty well.

I'm relatively happy with some of the press/media awareness I've managed to get for M.E and everyone I've met in each country has been fantastic.  I have to still be pushing to hit a time in a race or I struggle to get motivated to train.  Everything so far has been to consistently get finished in under 4 hours but I've found this increasingly tough since 2017.  I'm not sure I can put it down to age, I routinely get passed by runners 20 years older than me.  It must be the training schedule for the most part but I think also the mental strength required.

I feel like I've lost the ability to run through pain, fatigue and dig deep.  I don't know why.  I'm still determined and dedicated but something has changed.  Could be that it isn't life or death for me anymore, I've got parental responsibilities and maybe I have more perspective.  Or it could be that I'm just not as mentally strong.  I think marathon races are a dangerous hobby for people like me.  When a 4 hour pacer passes you with a few miles to go you feel like giving up and walking off the course.  The feeling of failure and 'wasted' effort of training is a real killer both in the race and on the plane home.  Running is good for mental health if you can reconcile some reasonable expectations with yourself.  If you think too much about what you 'ought' to be capable of I can't think of a more destructive hobby for you to take part in.

I need to re-wire my brain and reset some parameters.  On the start line of a race I often feel like a striker too afraid to miss a penalty than being excited at the opportunity to score.  I think I've become so self-critical of my training and race running that I'm in a difficult mental cycle to break.  The only thing that seems to help is meeting people in each country before the race and reading messages from supporters, it reminds me that it's not about times (I'm the only one who will be bothered), it's about trying to help people. 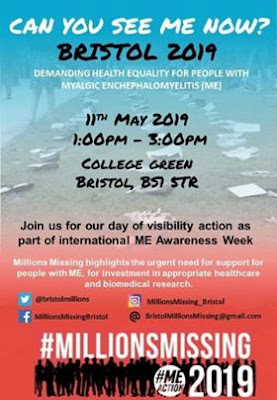 Well done to all of those who have completed marathons over the last few weeks for Invest In ME including my buddy Ben Scott, Jimmy Alexander and Steve Martin.

Thanks once again for sticking with me.  I'm looking forward to taking part in Millions Missing in Bristol next weekend and trying to do you all proud in Riga on the 19th.