Hi everyone, quick update on how the start of the 2nd year of the challenge is going.

I've clocked up 76 miles for January (about 55 more than the previous month!) and it all ramps up from here as I get back on the horse for another year of running around Europe.  Every night I'm not running I'm doing weights, stretches and core work (45 mins) which I hope will make the races much easier.

Also just hit a sort of landmark since I started working on the challenge, I've hit 1000 miles! 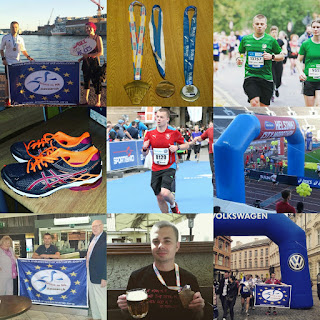 Unlike last year I've jumped straight into running 6 miles on Tues and Thurs nights home from work.  It's quite likely that this was a bad decision as I have struggled a bit throughout the month with as yet undiagnosed lower leg pains.  The weird thing is that I'm running without any pain at all, in fact I'm now running as well as last year at my peak.  But immediately after a run and overnight I get a warm, dull ache down both legs that no amount of foam-rolling or ice will rectify. 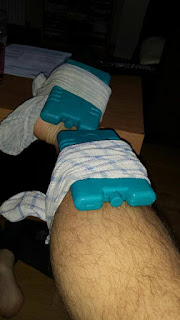 I wondered if it was shin splints but having read up on it I'm not convinced.  Anyway, it's all in hand and I have a sports-massage next week.  If that doesn't sort it I'll have to head off to the doctors.  My latest guess is that it's a lot of tangled muscle fibres and the legacy of my run in Dublin last October, I've not had a massage since September so I'm optimistic that this will help sort it before the mileage goes up in Feb.

Every Tuesday from 8-9pm I've been passing on my limited marathon knowledge to others as part of #UKMarathonchat.  I've really enjoyed answering questions and learning more myself from more experienced runners.  They've been good sports and retweeted info about ME and my challenge to their followers (2800 and growing fast) and it's been good to hear about new ideas/products/reads and more from them.

It inspired me to add a couple of new pages to my site: Winter runs past the Clifton Suspension Bridge, much colder than it looks here!

Lessons learned from my first 1000 miles

If you've ever tried energy gels you'll probably agree with me that they're a bit like sugary snot.  I'm not sure how much of their use is psychosomatic and I found from my last marathon that banana pieces and jelly babies were much more effective in 'wall' prevention and a big sugar crash.  Having read Christopher McDougall's 'Born To Run' which tracks the Tarahumara Indians (the ultra-running tribe from Mexico) I've cooked up a superfood called Pinole. 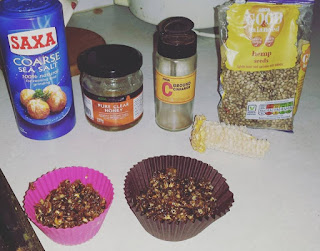 Pinole cakes for the longer runs

Here's how to make it:


I'll let you know what it's like as I'm trialling it on next weekend's long run!

So I've been reaching out to any English speaking organisations in Greece for some help with finding media and ME charity contacts.  I've tried British Consulates, trade organisations, private medical companies, press desks and forums.  So far not too much to report but I have found someone who has agreed to help who has had ME for over 20 years (more info to come in the next update).

Easy I hear you say? Hmmm

I'm learning more about this marathon (good and bad).

Invest In ME Annual Conference, May 3rd 2016: I'll be in Stockholm preparing to race when this takes place but great to hear that there could be a collection bucket and a bit of publicity on the day.

IIMEC11 - 11th Invest in ME Research International ME Conference 2016

That's it for this month, thanks all for your support and good wishes. Big shout to Tony Bradstock for posting this on facebook which had no fewer than 137 likes and 67 shares! 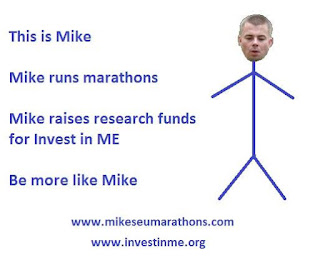